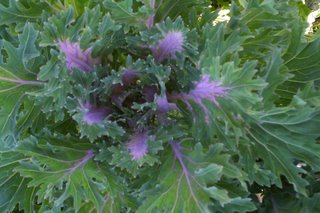 I am not one of those gardeners that carefully isolates heirloom varieties to protect their special genetic traits. Quite the contrary. I embrace random genetic exchange of the natural kind. When the birds and the bees move genetic material around via the pollen that plants provide for that purpose, I celebrate. And sometimes the plants celebrate too. 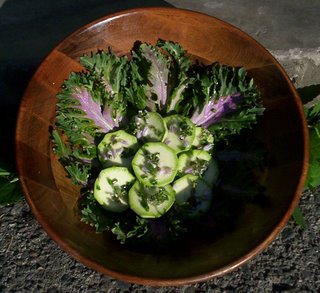 This lovely kale is a random cross between Red Russian Kale and Ornamental Kale. I have two plants growing right now – and I am so impressed that I started more seedlings. Not only is it beautiful, it is tasty, tender, and mild. Mild enough to enjoy raw in salads. The plants are fairly resistant to cabbage moths. No entirely, but not getting pounded the way some of my other brassicas are. They are also fairly resistant to aphids. The more colorful one of the two plants a little less so than the other. But the more colorful one is also more robust. It is about 3 feet high with multiple open heads. And it is so lovely passersby will distract me from the tasks at hand to find out what the heck it is and where they can get some . . . 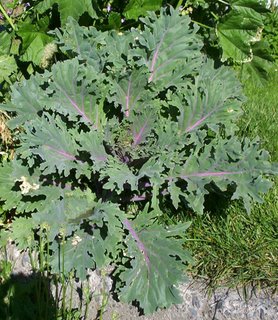 I do have a very few seeds, which I would be willing to share with someone who is actively breeding kale. (I anticipate having plenty of seed to share after these plants flower and set seed – either this fall or mid summer next year.) If you are working on breeding kale please send me an e-mail with a link to your web site, and I will be happy to share a few seeds. Everyone else will have to be patient – but, you can always encourage surprises in your own garden . . .

And I will definitely have free seeds of Red Russian Kale available this fall. I saved seeds from plants that were aphid resistant. And I may save some more from the plant that is showing no signs of dieing after flowering and setting seed. Stay tuned – I will post a notice here when the weather cools off – shipping seed in the heat of summer can have a bad effect on their viability.

Zabrina Mallow is the star of my garden right now. It sports a dozen 3 – 4 foot stems each bearing hundreds of 2 inch blossoms. The flowers vary from ivory to pale lilac, each one is marked with deep purple veins. Everyone who wanders past my yard stops to admire the flowers. If I am out in the yard they always want to know the name of those awesome flowers. 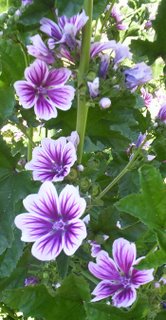 These fabulous flowers are also edible. They have a sweet tart flavor that goes well with fruit salads and looks smashing in punch and other cool drinks. But that’s not the only edible part. The young leaves are tender and mild and can be used in salads and stir fries. The older leaves are good for soups and mixed cooked greens. And the immature seed pods make a nice crunchy addition to salads and cooked dishes.

Each flower only lasts one day. The petals close in the evening, and by morning the ground is decorated with the faded purplish-blue blossoms. As the sun warms the air new flowers open, beckoning to the busy bumblebees and beneficial insects. There where yesterdays flowers used to be, ovaries are swelling with seed. I always show visitors where the seed is ripening and encourage them to come back in a month or so, when I will have seed to give away.

My Zabrina Mallow seed came to me as a gift, in the dead of winter. I sprouted the seeds indoors and once the little plants looked like they had a hope of staring down hungry slugs, out into the garden they went. They survived the winter deluge, as well as the few sprinklings of snow we received. And now, wow! I will have tons of seed to plant and share. And the show will be even bigger and brighter next year.

Zabrina Mallow is sometimes called Striped Hollyhock, but it isn’t a hollyhock at all. Hollyhocks tend to send up one very tall stem (6-10 feet) and their petals aren’t striped.
Biannual to short lived perennials, hollyhocks come in single, double, and frilled edible flowers up to 4 inches across. Hollyhock flowers can be dried to make a soothing tea that is sensational when mixed with mint, chamomile, or lemon balm. For the small garden there are dwarf hollyhocks that grow only 2 – 3 feet tops. All Hollyhocks will grow happily here in zone 8. They are available in white, black and almost every other color you can imagine.

If you like color in the garden, the Mallows are famous for colorful flowers. They are easy to grow and they are not too picky about soil or temperature. Just provide them with as sunny a spot as you can spare. Keep them watered until established and then, if necessary they can withstand occasional dry spells. Zabrina Mallow and Hollyhocks aren’t the whole story, Hibiscus, Lavatera, Malope, and Musk Mallow are all in the mallow family and have similar flowers.

Hibiscus will grow from 2 to 6 feet tall in a single season, and die back to the ground with the first frost. In frost free climates they are often perennial, and some will even resprout after a frost if they are given a sheltered place in the garden. They bloom in single colors with tropical looking flowers up to 4 inches across in reds, pinks, yellows, and white. Some of them have fancy cut-lace leaves, and there are even a few with foliage in interesting colors.

Lavatera and Rose Mallow are used interchangeably for hardy annual mallows with 2-3 inch flowers in single colors, often with deeper colored veins. Flowers are most often found in shades of pink or white. These plants can form a small bush generally from 2 – 3 feet tall, however there are both shorter and taller varieties available. Keep in mind that they will die back to the ground in fall. But if you need something to fill in temporarily between slower growing perennial plants, Lavatera might be just the ticket.

Malopes are the true bedding plants of the Mallows. They only reach two feet, at most. Their delicate blooms come in the standard mallow colors of pink, rose, and white. Unlike other mallows the throats of the flowers are often a deeper color than the edges of the petals, with the deep color extending out along the veins. These make nice annual additions to flower beds and the front of borders.

Mallow or Musk Mallows include annuals, biannual, and perennial species. They range from 12 inches tall all the way to 6 feet, depending on variety. Zabrina Mallow is a perennial member of this group. In our coldest mountain zones it is grown as an annual, but it sets copious seeds so one need only track down plants or seeds a single time. The Musk Mallows sport 2 inch blooms in white, purple, mauve, and pink The flowers are often deeply veined making very striking flowers.

There are two Mallow varieties grown specifically for the kitchen. Look for Curled Mallow and Red Chinese Mallow if you want something a little different for soups and salads. And then there is the true Marshmallow, an extract of which was originally an ingredient in the confection that goes by its name. Marshmallows do not have showy flowers but their light grey fuzzy leaves add an interesting contrast to the garden. Herbalist prize them for their soothing cooling tea.

Whether you are looking for flowers, a refreshing cup of ice tea, or something new and different for the kitchen one or more of the mallows are sure to fit the bill. If your local nursery doesn’t carry the mallows you would like to try, check out the following mail order sources: Richters for Curled Mallow, Hollyhocks and Marshmallow: (905) 640-6677 http://www.Richters.com / Select Seeds for a purple lace cut leaved hibiscus (called Red Shield), and Lavatera: (800) 253-5691 http://www.selectseeds.com
/ and Thompson & Morgan for Zabrina Mallow and Malope: (800) 274-7333 http://www.thompson-morgan.com

Next week we will be taking a look at ways to conserve water in the garden. Until then you can probably find me hiding from the heat down at the creek. (LOL) Oh yea, digging the dirt – that’s right. In the cool of the morning I am out in the garden Digging the Dirt.

Digging the Dirt / April in the Garden

Jet Stream on Steroids   Gardeners and farmers have tried to predict the weather since ancient times. Seers were once sought out in their ...

Catch up with me around the web: